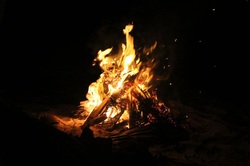 You're cool. You're so coooool, because...
You found the secret content! Yes, YOU rock.

There's a theme here, a method to the madness. The third book in my YA series is about a hidden treasure, and in celebration of YOU finding the secret content, I give you... and only YOU... a sneak peek at book three:
But first, the blurb:   (clearing throat, ... deepening pitch, ...  preparing to speak in a male radio voice... Ahem.)
Separated by jealousy, familial obligation, and pride, young lovers are  STAR CROSSED .
Christina ran away from home, following her twin brother, protecting him and guarding her heart after it was broken. Ten years later, an out-of-the-blue phone call from her mother forces Christina to return to Cedar Hill to reconcile with her terminally ill mother, reconcile with her first love before her heart turns to stone, and uncover a 150 year old secret that died with another pair of STAR CROSSED lovers... or did they die?

Sneak Peek from STAR CROSSED:“I’ve been looking everywhere for you.” Jorgé put down his drink and with a grin he held out his hand.

“What’s that?” Christina looked from his hand to his face.

“What’s it look like, Chita?” A bonfire blazed behind him, backlighting him and the ruins of the brick folly that stood between them and the party.

Only in Virginia could you hire a three piece bluegrass mariachi band. For the annual event held at the end of the harvest season, no expense was spared. It was the one night of celebration in which Mama Mayella took part, although she would complain the rest of the year about the waste and expense.

“I’m going to teach you to dance.”

“Nooooo.” Christina walked backwards and he came toward her playfully, menacingly.

“Yes. Remember when you were a kid and tried to drown me by way of pretending to teach me to swim? I believe the phrase you used then was ‘uptight’. I’ll show you 'uptight'.”

Christina ran around him, then turned again and backed into the brick structure that filled the center of the back yard. “No. Not in front of all of these people.”

As one of the only half-dozen women at the end of season party, she had been the center of attention from the moment she came out of the house. Jorge stepped between her and the mostly male, well-behaved ensemble.

“The more production you make of this the more people are going to stare.” He looked around with a grin. “Now, are we gonna do this the nice way or the embarrassing way.”

“You are so gonna pay for this.”

Someone called, in Spanish, for a change in the music from the three piece band and a tune with a salsa rhythm began.

“Goes like this.” Jorgé took her hand in his left and put his right hand on her waist, holding her away from him at a respectable distance. She hesitantly put her other hand on his shoulder. “It’s a rock step. Back, middle, middle, front, middle, middle…. Watch my feet.” He chucked her on the chin and pointed down.”

“Okay, look back down until you get the hang of it." Laughter was in his voice. "Back, middle, middle, front….”

She mouthed the words. He smiled. His face was clean shaven and his hair worn short and instead of his usual denim shirt, he had dressed up in a crisp, white shirt that stood out against his dark hair and skin.

He nodded with a grin. “Very well. Now, stop counting and feel the music.” He moved his hand from her waist to her back and pressed her shoulder blade, their circle becoming more intimate, yet their steps taking them in a broader counter-clockwise arc, slowly moving around the bonfire. As they moved, the heat of the fire warmed alternately her back, then her face and hands.

“Okay, show me something more.”

He spun her out, keeping hold of one of her hands, then spun her back in, catching her waist again. She laughed and without inhibition, rested the side of her head against his, they being of about the same height. Slowly, her smile faded. On the far side of the bonfire they were practically alone. It only required a slight turn of her head and she could see him up close. His was the face she knew best. When had she made such a close study of him? There was nothing new about the face next to hers, and yet, every inch was new. Only she knew how he had acquired the scar on his chin. Yep. Same scar. Long ago she had commented on his eyes, how they turned up at the outside corners like a subtle smile. Yep. Same eyes. His lashes were longer and darker than hers would ever be. Her hand, the one on his shoulder, tentatively brushed the clean-cut edge of his hair. Just yesterday it had been a quarter inch longer. He must have got it cut for the party. Same hair, only shorter than yesterday. She studied his face up close and he hers and she felt the change in their relationship take place. Somehow, she had known all along they were meant to be together. Maybe he had known too, but he had been careful with her, waiting for her to grow up and to realize that he had been standing right there in front of her all along.

His dance frame went rigid and he put physical distance between them. When she met his look, he averted his eyes,  looking down at his feet, as if he were the one learning the steps, but that point in their relationship was past. One song bled into another, they came full-circle, in the thick of the party, but it was as if everyone else saw the difference now too. They danced three songs straight. When they stopped dancing, she knew no one else would ask her to dance. She was meant for Jorge, their destinies inextricably bound toward some goal as yet unknown to them.

The third song ended, and Jorge let go her hand. It felt odd, the absence, and she rubbed her fingers against her palm in an attempt to refill that void.

Jorge cleared his throat and took a step back. "You done good." He looked around him. "Now that you know how, I shouldn't take up  every dance." He caught the arm of the nearest man, a kind old man everyone called Bupe. "She needs more practice. Watch her, Bupe. She's got big feet."

The older man stepped up without hesitation and extended his hand to Christina. She had lost her fear of dancing. She took his proffered hand, flicked Bupe a smile, then scanned for Jorge over his shoulder. Jorge was moving away, fast. He was already on the far side of the folly, away from the light of the bonfire, being swallowed by the dark.

But before he disappeared completely, Christina saw what he did. He rubbed his hand on the side of his leg - to draw warmth back into it - to fill the absence - to recapture the feel of her hand.